A couple of years ago, I wrote the following book review in our newsletter, ‘Three Rivers Lodge – Shorelines’, winter 2009 edition. There are several great adventure books sketched here that you’ll most assuredly get a kick out of. And it’s so easy nowadays – just click on Amazon, order and wait for a dreary day. (There should be a plethora of used copies available.) Now don’t waste a great fishing day reading an ol’ book.  Get outside!

(To read our most recent newsletter, go here.)

If you have been to Labrador or plan to come someday and enjoy reading non-fiction adventure, there are some captivating books that have been written over the past century or so that will reveal the challenge of the land and lore of Labrador. Top of the list is Lure of the Labrador Wild (LLW) by Dillon Wallace. Wallace was seduced by Leonidas Hubbard’s enthusiasm and passion for adventure to join him and their half-Cree guide George Elson in 1903 to explore “the last great void on the North American map”. The next year, Hubbard’s wife, Mina, commissioned Wallace to write about the expedition, mostly in hopes of “clearing” her husband’s reputation. LLW became an immediate best-seller. Not only did this book captivate the Teddy Roosevelt-inspired American readers, it fueled a feud between Wallace and Mina Hubbard that led to “dueling expeditions” the following year, 1905. Mina recruited her husband’s guide Elson to lead her expedition and Wallace put together a new crew of young, high-spirited adventurers and more steadfast Indian guides.  The “duel” spawned two beautifully written books, Mina Hubbard’s A Woman’s Way through Unknown Labrador and Wallace’s The Long Labrador Trail.  While neither of these two later books quite match the raw passion of Wallace’s original, the trilogy offers the complete experience. 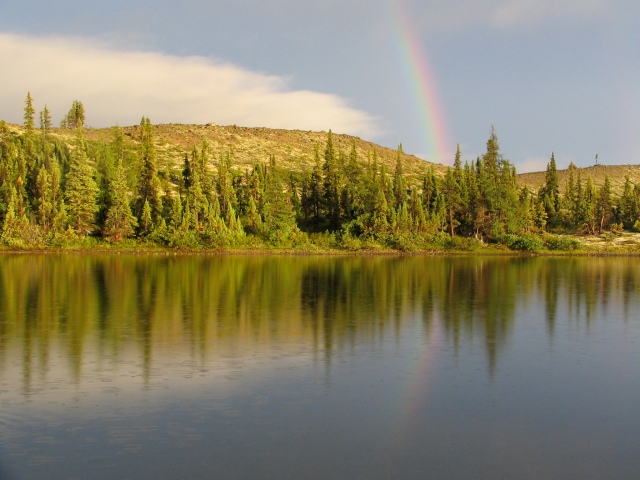 In 1988, James West Davidson and John Rugge became intrigued with the Hubbard and Wallace story. As avid canoeists (they earlier wrote The Complete Wilderness Paddler), they retraced the expedition routes and conducted extensive research that included interviews with descendants and the study of the original Wallace, Elson and Hubbard (L. and M.) journals. From their experiences and findings, they wrote and published Great Heart: The History of a Labrador Adventure (GH). While Davidson and Rugge took some admitted liberties by filling in between the lines of diaries and journals, GH is a revealing study of life on the Labrador, human relationships, self-motivation and the will to survive. Read LLW first, then GH, then the other two.

William Brooks Cabot was another early Labrador explorer. Being from a prominent family and a successful engineer, Cabot retired early and began to fulfill his ambition to learn first-hand of Native American cultures. Annually, he traveled the coast of Labrador alone in a canoe from 1903 to 1910, putting in at settled inlets to voyage deep into inland Labrador.  His study and photography of the Naskapi (now called Innu) form an invaluable anthropological record of the region’s native people before they lost much of their traditional culture.  Though more scientific in delivery than the books aforementioned, Cabot’s two books In Northern Labrador (1912) and Labrador (1920) vividly depict a Labrador landscape that has remained virtually unchanged to this day.  Cabot’s books are scarce, but available and are costly as they are 1st editions.  But you can read them in their entirety at http://books.google.com.

One final book is True North by Elliott Merrick, a Yale grad and NJ ad executive who left for the Labrador in 1929 to volunteer for the Grenfell mission. His is a story of living and working with trappers and Indians in the frozen wasteland where endurance is THE trait that marks the man.

Though written decades ago, these books are all page-turners and will treat you to much more than a look into that great land called Labrador.

This entry was posted in Reading about Labrador. Bookmark the permalink.